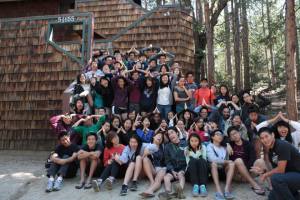 This is adapted from a short speech I gave at AAMP’s 25th birthday party last semester.

In honor of AAMP’s 25th birthday and for an audience of AAMP mentors, mentees, and friends, I wanted to briefly talk about is the question “Why we do need race-based mentoring programs?” I’m not an authority figure on the subject, and what I want to talk about draws a lot from what I’ve learned as an AARC intern, from my Asian American Studies coursework, and from my close friends. I would like to share what I’ve learned, and what I think all of you should consider.

This question is hopefully one that we’ve all attempted to answer ourselves. Since there are so many ways to approach the question, I would like to focus on a specific theoretical aspect of this discussion that draws from the work of Asian American Studies scholar, Glenn Omatsu. For many us, including myself, we were drawn to something like AAMP because we wanted to not only gain a clearer sense of our Asian-American identity but also make sense of the macroaggressions and microaggressions we’ve faced in our lives. This is exactly what a space like AAMP is for. However, one of the key lessons that AAMP or other mentoring groups tries to impart is that our individual experiences are part of a larger context. The problems and issues of Race go way beyond the stereotypes of single interactions. The scariest thing about Race is how entire histories about a particular Race can be forgotten and a new, false history is fabricated, attached to that Race, and then becomes a deep-seeded belief in society. How did Asians, a group that was the pariah of society that was literally banned from immigrating to the United States become the “Model Minority?” We need to learn about the history of discrimination in housing and real estate, where Black Americans in particular were left out of the GI bills and affordable loans that let White Americans buy suburban homes and afford to go to college. As home ownership is the single most important factor to wealth accumulation, this is a major reason why Black Americans and other people of color in urban cities struggle with poverty today. Meanwhile, supposed experts like Amy Chua and Bill O’Riley fabricate a history and claim that the “culture” of these peoples impedes their success. It’s tragic enough when mainstream society believes these false histories but even more so when people of color internalize these acts of racism.

AAMP is a place where you can learn to be equipped to contend with these false histories and be inspired to create new ones as an act of liberation. We need to define our own histories and reject the one imposed on us. As you become acquainted and involved with a mentoring group like AAMP the next or simultaneous step is to reach out to other groups with their own histories and along other axes of identity such as class, gender, and sexuality. To be apart of something like AAMP means to be apart of a larger political alliance.

The Story of CSAV

The Healing Heroics of Humor