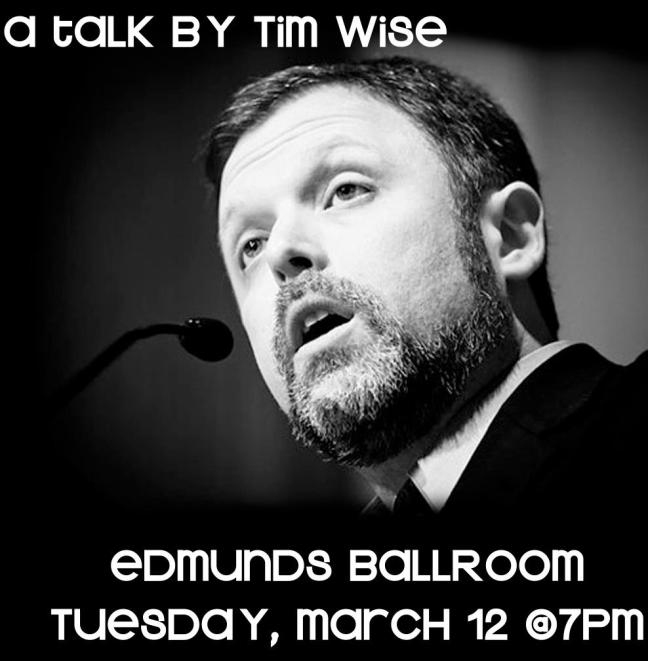 I must confess that I was not familiar with Tim Wise and his work before tonight’s talk, so this post will be limited to addressing parts of his speech and my reactions to them.

He opened his talk with a bold statement:

If white people don’t engage race because they’re afraid that they’ll say something racist towards people of color, chances are those people already are racist.

This quote underscored the theme of his talk: to get white people to be aware of issues affecting people of color. He refrained from making any suggestions of concrete steps that need to be taken, instead focusing on why white people are blissfully unaware and the problems stemming from this ignorance. He used the historical context of the Civil Rights movements in the 60’s multiple times throughout his talk and drew upon many personal experiences with black friends and students. During various parts of his speech, however, it felt like he was bordering on using African American speech patterns and slang, which was somewhat unsettling to me personally.  I’m really glad, on the other hand, that Wise touched upon the value of resource centers on college campuses by arguing against the criticisms of these spaces as self-segregating. He contends that the presence of these cultural spaces is correlated with better academic performance and actually encourages more integration rather than separation. Additionally, Wise framed white privilege as the privilege of belonging, where White Americans can be treated as individuals whereas people of color continue to carry the heavy burden of representation. He stated that “to be white means you don’t need to know any better,” a view that he argues dangerously pervades white people’s behaviors and drives the continued institutional barriers for people of color. Overall, I felt that it was a talk that had a lot more style than substance, but he was a very sassy and engaging speaker that hopefully got a wider audience thinking more critically about white privilege.

Some questions I wanted to be addressed:

What does it mean to be a white anti-racist? It’s still unclear to me and was clearly a question that attendees wanted addressed, though I didn’t get a chance to hear his answer during the Q+A session.

How does Wise feel about the model minority stereotype, and how does it affect the way white people view institutional barriers for people of color?

Feel free to respond in the discussion section below!

The Story of CSAV

The Healing Heroics of Humor